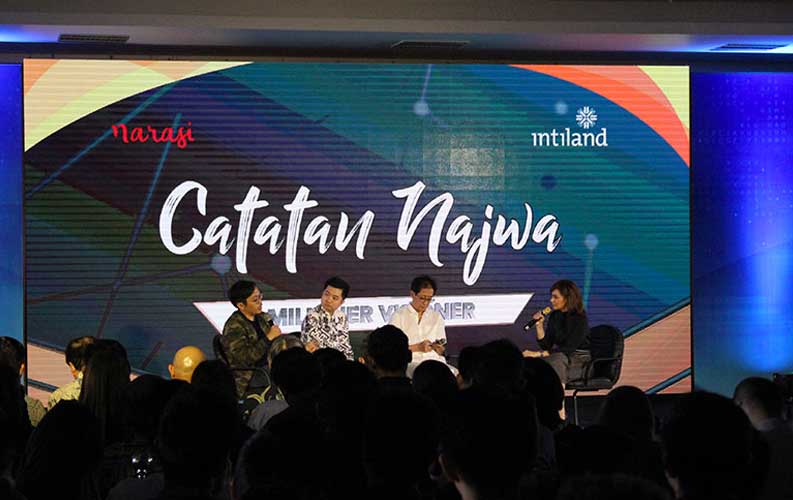 Intiland and Narasi collaborated to hold a talk show series “Catatan Najwa” with senior journalist and famous host Najwa Shihab. On the first talk show, Catatan Najwa raised the theme of “Visionary Billionaires” by presenting three different generation figures as interviewees, namely Irwan Hidayat (Director of PT Intisari Jamu Sido Muncul) and two successful young entrepreneurs, William Tanuwijaya (CEO & Co-Founder of Tokopedia) and Achmad Zaky (CEO of Bukalapak). The event which was held at Spazio Hall, Surabaya, on Thursday, July 12th 2018 was attended by more than 500 invited guests, most of whom were entrepreneurs in Kota Pahlawan.

These three interviewees of different generations and backgrounds were sharing tips and stories about the ups and downs of pioneering and raising their respective businesses. Najwa Shihab sharply carved out the hidden stories of each interviewee and presented them beautifully as an inspirational story.

William Tanuwijaya and Achmad Zaky, for example, despite still being under 40 years they successfully built a business empire worth trillions of rupiah. Achmad Zaky recalled that he pioneered Bukalapak from an office that was originally a boarding house. Unlike his business competitor, William Tanuwijaya started his business when his brilliant idea came as he worked as an internet cafe assistant.

Irwan Hidayat has a different story with the two young entrepreneurs. The grandson of the founder of Sido Muncul herbal medicine factory shares an ‘out of the box’ innovative strategy from the guideline that is usually done by other herbal factories. With his distinctive chirping and his as-it-is casual style of speech, he gives a lot of enlightenment from his experiences in maintaining a business built by his extended family.

The show, which has planned to last only one hour, lasted more than two hours because a lot of invited guests wanted to ask questions. Najwa Shihab as a host has said that this show was extraordinary because one of her dream was realized, she could bring together CEO Tokopedia and Bukalapak on one stage.