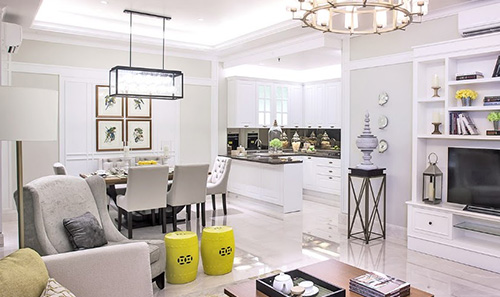 Surabaya (19/02) – Property developer company PT Intiland Development Tbk (Intiland; DILD) has successfully finished the main structure devlopment of Spazio Tower mixed use & high rise. The completion of the consutrction was marked by a topping off ceremony by the company’s management on Monday, Ferbuary 19, 2018.

Intiland Vice President Director and Chief Operating Officer Sinarto Dharmawan said that the topping off process is an important process in the construction of Spazio Tower. The company will soon enter the finishing stage of the building’s facade and overall interior.

“Spazio Tower is an important part of the development of Graha Festival concept, an integrated modern property area equipped with various facilities, lifestyle, business, leisure, culinary and health. Spazio tower is an alternative for people to go to work to, do collaboration with and enjoy plenty of services,” told Sinarto.

Occupying a total area of 4,600 meter squares, Spazio Tower is strategically located at the centre of business and commercial area in West Surabaya. Developed based on the concept of mixed-use, Spazio Tower has many different functions that satisfy the people’s needs.

Sinarto revealed that the development of Spazio Tower has gotten a pretty good reception from the public. The sales of strata title office units have reached 60 percent. Meanwhile, the retail facilities have been leased by a couple of companies that own prominent brands.

According to him , the positive response from the market can be attributed to the plan and the direction of the development of West Surabaya area that is owned by the Surabaya City Administration. Along with infrastructure and transportation developments such as toll road, this area is developing rapidly and will become  one of the new and modern business and lifestyle centers in the city of Surabaya.

“The development of property using the concept of mixed-use can be the answer for the city development. This concept gives easiness for the people to fulfill many needs without having to add more transportation problems in this city that are caused by the people’s mobility to fulfill their needs,” said Sinarto after the topping off procession.

The company is optimistic that the development process of Spazio Tower is going to run smoothly and will go as planned. The handover stage of the office units is projected to be conducted in the third quarter of 2018, and in general the tower is expected to run by the end of this year.

Along with the finishing of Spazio Tower development, the company has partnered up with Kayumanis Group for the management of the hotel’s facilities. This strategic partnership was officiated with the signing of a Memorandum of Undersanding between the company’s management and Kayumanis Group held in Surabaya on February 19, 2018.

Through this partnership, Kayumanis Group will manage the hotel and function hall available at Spazio Tower. The hotel has 143 rooms in various types and equipped with different facilities such as infinity swimming pool that offers a panoramic view of Surabaya from the top.

“Kayumanis Group has international reputation and acknowledgment. We believe that under the management of this group, the hotel at Spazio will be a favorite option for the people to stay or fulfill other needs such as holding a wedding party or others,” said Sinarto after the MoU signing.

Kayumanis is also famous for its delectable dishes and the management of its villas that is very exclusive and private. The group successfully runs a few top restaurants such as Dining Corner Ubud, Piasan Nusa Dua, Tetaring Nusa Dua, kayumanis Resto Jimbaran and Gong Restaurant Sanur. ***