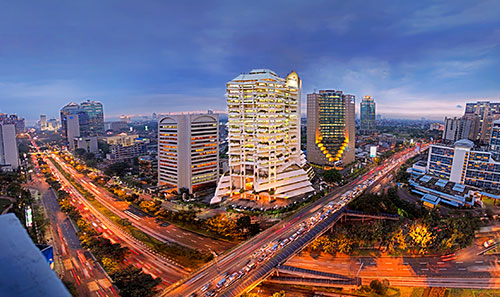 Jakarta (30/10) – The national property developer, PT Intiland Development Tbk (Intiland;DILD) reported the Company’s financial performance for the period of January-September 2017. The consolidated financial report for the period ending on September 30, 2017 reveals that the Company garnered operating revenues of Rp1.7 trillion, an increase of 4.1 percent from what the Company booked in the same period in 2016, which was Rp1.66 trillion.

Intiland’s Executive Director of Capital and Investment, Archied Noto Pradono said the rise was due to revenue recognition in the industrial segment worth Rp551 billion. Sales from this segment contributed 31.9 percent of the total revenues.

“In the nine months into the year, the sales of industrial estate contributed quite significantly to the operating revenues. The rise notably comes from sales recognition of Ngoro Industrial Park by an automotive company in the second quarter of this year,” Archied explained.

Based on the segment, aside from industrial estate, another big contributor is the mixed-use and high-rise development, which contributed Rp490.8 billion, or 28.4 percent of the total revenue. The biggest contributor in this segment is 1Park Avenue apartment project in South Jakarta.

The property investment segment which is the Company’s source of recurring income contributed Rp345.9 billion or 20 percent of the total revenues. The revenue from this sector jumped 38 percent from the achievement in the same period in 2016, which was Rp250.4 billion.

Based on the types of operating revenues, the development income contributed Rp1.4 trillion, or 80 percent of the total revenues. The reset came from recurring income segment with Rp345.9 billion, or around 20 percent.

“The decrease in net profit is due to the rise of loan interest expense for working capital required to complete the construction of our projects,” Archied explained.

Archied said in general the property market this year was not fully conducive. Even though there were indications that things were improving in the third quarter of the year, the market’s level of confidence hasn’t fully recovered, and customers still tend to wait and see.

The indicator showing the market is improving is the Company’s improved sales, notably in the third quarter of the year. In the period of January-September 2017, the Company garnered marketing sales worth Rp3 trillion, or increasing 115 percent from the same period in 2016. This achievement is 131 percent higher than the targeted Rp2.3 trillion set by the Company at the beginning of the year.

“We continue to monitor the movement in the property market. Our focus at present is marketing our current projects,” said Archied.

The management of Intiland hopes market confidence in the property sector would recover. The macroeconomic stability, the downward trend of interest rates, and regulations regarding the possession of property by expatriates/foreigners are expected to be the catalyst for the market to invest in the property sector.*