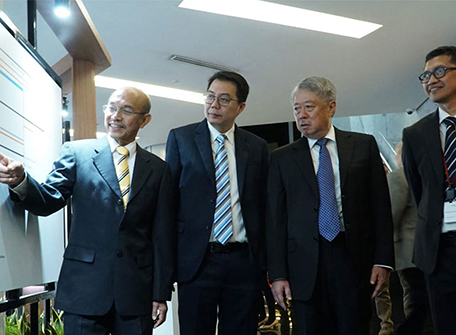 Jakarta (15/5) Property developer, PT Intiland Development Tbk, held its Annual General Meeting of Shareholders (AGMS) for the fiscal year of 2018. At the AGMS, held in Jakarta on 15 May 2019, the Shareholders granted approval to the entire report and plans proposed by the Company as stipulated in the AGMS agendas.

The AGMS approved and ratified the Company’s Annual Report for the fiscal year of 2018, which encompassed the Board of Directors Report, the Board of Commissioners Supervisory Report, and the Financial Statements for the period ending 31 December 2018. The Shareholders also granted approval for the use of the 2018 net profit amounting to Rp203.7 billion.

Archied Noto Pradono, Director of Capital Management and Investment of Intiland, stated that out of said net profit, as much as Rp20.7 billion will be distributed as dividends, equal to about Rp2 per share. The amount of dividends distributed to the shareholders is equivalent to 10.2 percent of the Company’s net profit for 2018.

“The remainder, amounting to Rp180.9 billion, is recorded as retained earnings and another Rp2 billion as mandatory reserve,” stated Archied.

The Company further received the approval from the AGMS concerning the amendment to article 3 of the Company’s Articles of Association, on the Purpose and Goals and Business Activities, to be aligned with the Indonesian Standards of Business Classification. This amendment was in relation to the Regulation of the Government of the Republic of Indonesia No. 24/2018 on the Electronic Integrated Business Licensing Service and the Joint Announcement from the Ministry of Law and Human Rights of the Republic of Indonesia.

In keeping with 2018’s achievements, Archied noted that the Company had successfully maintained its business performance in 2018 amidst a less-than-conducive situation in the property market, owing to weak, relatively stagnant demand from customers of property products.

“The property sector remains weighed down and is below a level that is conducive to growth. We however believe in the opportunity to focus on development segments that provide a booster for business growth,” said Archied.

Amidst the challenges in the property industry, the Company recorded business revenues of Rp2.6 trillion in the past year, up by 16 percent from the previous year’s achievement of Rp2.2 trillion. Operating profit and net profit for the year were recorded at Rp327 billion and Rp203 billion, respectively, down by 5.2 percent and 31.6 percent from the previous year’s figures.

“The decline in profitability was mainly owing to the drop in gross profit margin and high interest expense,” stated Archied.

According to the quarterly financial statements for the period ending 31 March 2019, the Company booked revenues of Rp887.6 billion, up by 25 percent from the first quarter of 2018, which amounted to Rp709.2 billion. The Company’s operating profit and net profit subsequently were recorded at Rp156 billion and Rp48 billion, respectively.

The Company is of the view that the challenges in the property industry for developers remain rampant. Some effective breakthroughs are needed in order to maintain business performance, in terms of expansion strategy, construction management, marketing and sales, as well as in cost management aspects.

In light of this situation, the Company focuses, among other things, on finding bold solutions to prop up sales performance. The Company has pursued and prepared several key strategies in its effort to anticipate the challenges and a shift in the direction of the property market.

One of the Company’s current measures is to focus on developing its ongoing projects. The Company also strives to boost sales of its product inventory across all of its projects under development.

“Sales in the first three months of the year remained hampered, and we have yet to see some considerable change in the appetite among customers and investors. We will continue to put some effort to boost our sales by engaging in a number of breakthroughs,” explained Archied further.

This situation was aptly reflected by the Company’s sales performance in the first quarter of 2019. Marketing sales stood at Rp254.2 billion for the period, making up about 10.2 percent of the year’s target of Rp2.5 trillion.

In the residential area development segment, the Company relies on the sale of housing units from Serenia Hills and Talaga Bestari projects in Jakarta, as well as from Graha Natura in Surabaya. In the apartment segment, the Company’s sales have been derived from five apartment projects, i.e. 1Park Avenue, Fifty Seven Promenade, and Regatta in Jakarta, as well as Graha Golf and The Rosebay in Surabaya.

“Sales from our residential porjects, especially the development of residential areas, have been relatively stable and reliable. Meanwhile, for apartments, we will focus on selling our inventory,” said Archied.

The Company has a number of new project development plans in the pipeline to further boost its sales. However, the Company is waiting for the right moment to arrive, paying close attention to the changes in the market trends prior to launching these projects.

“This year we tend to be more conservative in terms of new developments, especially for our high-rise projects such as apartment buildings and office buildings. We see the need to observe how the market responds, and this also means paying attention to the changes in the consumer appetite and also the appetite of banks to provide financing. To boost sales, we will step up our promotional programs that benefit customers and investors,” he spoke further.

The Company also launched a marketing campaign called #LivingConnected in March 2019. The #LivingConnected program is a public awareness-raising campaign to improve their quality of life by residing in areas close to public transportation facilities, especially those who live in Jakarta and the surrounding regions.

The presence of various modern modes of transportation, such as the Mass Rapid Transit (MRT), Light Rapid Transit (LRT), and the Transjakarta bus lines is engendering change in the society, by making people more connected and improving their quality of life in the long term.

The Company is proactively participating in this new dynamic development by offering a number of residential products and office space that offer great convenience as they are located very near the MRT stations as well as other modes of transportation. The Company feels the importance of integrating all these modern modes of transportation adequately to benefit the society.

“We strive to address such needs by offering property projects that boast high mobility and connectivity to the people in living their day-to-day lives and doing their activities,” he said.

As part of the #LivingConnected campaign, the Company has launched a promotional program titled “Stay On The Blue Line”. This program gives special offers and advantages of Intiland’s property products located on or close to the MRT.

There were seven of such locations in which Intiland is currently developing its projects. These include the integrated office areas of South Quarter, Poins Square, Serenia Hills, and South Grove, located near the Fatmawati and Lebak Bulus Stations. Meanwhile, the 1Park Avenue apartment building is situated not far from the Blok M Station.

In addition to these projects, the Company also developed Fifty Seven Promenade, an integrated complex that encompasses apartment units, office space, and retail area in Thamrin, located close to the Bunderan Hotel Indonesia and Sudirman Stations. Another development is the Intiland Tower office building, adjacent to the Bendungan Hilir Station.

“The locations of these projects are relatively close to MRT stations, all of them are within walking distance. They are the best property investments one can get for now and in the future,” said Archied.

The Company believes that the presence of MRT and other modern modes of transportation is affecting the people’s culture, habit, and living pattern, making them more organized in general. From the vantage point of investment, the property projects located near to public transportation facilities have a strong prospect of having their investment value appreciate.