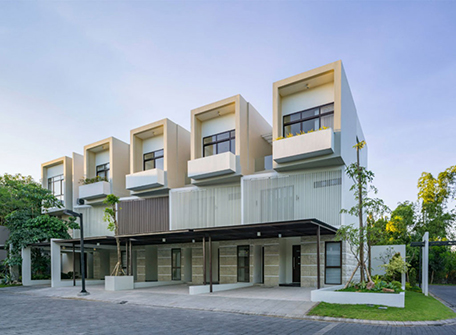 Archied Noto Pradono, Director of Capital Management and Investment of Intiland, explains that the growth in revenue was owing to the increase in revenue from mixed-use & high rise development segment. This increase was in line with the completion of a number of mixed use & high rise projects in Jakarta and Surabaya, such as Fifty Seven Promenade, Graha Golf, and The Rosebay.

“The development of a number of mixed-use & high rise projects will reach completion this year. We hope that the property market will grow back and investors’ and buyers’ appetite will return,” says Archied.

Archied also explains that Intiland’s business growth has been underpinned by four development segments. In addition to the development of mixed-use & high rise, the Company’s revenue is also derived from residential, industrial, and investment property segments.

The mixed-use & high rise development segment has been the largest contributor to Intiland’s revenue, netting Rp523.4 billion of revenue, or making up 59% of the total. This amount soared 165% from the first quarter of the previous year, of Rp197.4 billion.

The second largest contributor to revenue was the investment property segment, which recorded revenue of Rp157.1 billion, or 18% of the total. Revenue from this segment, which generates recurring income for the Company, increased 13% from Q1–2018’s revenue of Rp138.5 billion.

The residential development segment generated Rp144.7 billion or 16% of the total revenue. This figure marked a 61% drop from Rp373.3 billion within the same period in the previous year.

The fourth contributor was the development of industrial estates, which yielded Rp62.4 billion or 7% of the total revenue. This segment’s contribution was derived from the sale of the Company’s industrial land at Ngoro Industrial Park, Mojokerto, East Java and warehouse in Aeropolis.

“Generally, our revenue rose in terms of both development income and recurring income. Development income remains our biggest contributor to revenue, with Rp730.5 billion or 82% of the total,” says Archied further.

The investment property segment, which provides recurring income for the Company, contributed 18% to the total revenue, or Rp157.1 billion. This was up by 13% from the same period in the previous year, of Rp138.5 billion.

“Contribution from recurring income increased owing to the rise of revenue from the management of facilities, office lease, and industrial estate. We believe that the contribution in the form of recurring income will continue to increase, consistent with the completion of a number of mixed use development projects,” says Archied.

The Company’s higher revenue has boosted its profitability performance. In Q1–2019, the Company recorded gross profit of Rp313 billion and operating profit of Rp156.2 billion. Compared with the same period in the previous year, these figures improved by 10.4% and 13.4%, respectively.

However, despite the positive growth in both gross profit and operating profit, the Company’s net income declined to Rp48.4 billion, compared with Rp112.8 billion recorded in Q1–2018.

“The drop in net income was owing to the higher interest expense paid in the first three months of 2019,” explains Archied.

Sales from the residential area segment contributed Rp175 billion, making up the largest part of the total, at 69%. The biggest sales from this segment were derived from two of the Company’s residential projects, namely Graha Natura in Surabaya and Serenia Hills in South Jakarta.

The mixed-use & high rise development segment recorded marketing sales to the tune of Rp79,2 billion or 31% of the total. The largest contributors to this segment’s sales were from the sale of apartments in 1Park Avenue in Jakarta and The Rosebay in Surabaya.

In terms of project location, Archied notes, sales from projects in Jakarta amounted to Rp136.2 billion or 54% of the total. The remaining Rp118.1 billion or 46% was generated by projects in Surabaya.

“The property market has yet to recover fully in the first quarter of the year. Most customers remain cautious in their buying decisions, choosing to wait and see instead, and delay their property buying. However, for residential products, we have seen the market improve and stabilize, and thus sales have been generated from this segment,” says Archied.

The Company admits that generally the challenges in the property market in the first quarter of the year have been immense. Such a condition has been deeply affected by the recent development in the country’s political atmosphere, in line with the campaigning period related to the general elections.

“We strongly hope that after the general elections, conditions will improve and become more conducive for customers to finalize their property buying and investment,” says Archied.

Intiland’s management remains optimistic that the property market will be able to recover and grow at a stronger pace. For the rest of the year, the Company will maintain its largely conservative strategy in a move to anticipate and deal with the changing trends in the market.

The Company strives to maintain its business performance by relying on organic growth and by forging strategic partnerships with investors. This strategy will be implemented among others through the development of ongoing projects and by opening up new opportunities for partnership in the development of new projects.