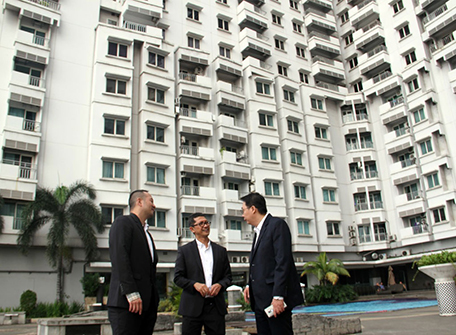 Jakarta (11/04) – The property developer, PT Intiland Development Tbk (DILD, Intiland) via its subsidiary, PT Inti Sarana Ekaraya, forged a new strategic partnership with PT Menara Prambanan for the development of mixed-use and high rise project, Poins Square, in South Jakarta. The scope of the alliance manifested as a joint venture includes the ownership, management, and future developments of Poins Square, especially as regards its facilities, retail area, and commercial area. The signing of the agreement was held on Thursday, 11 April 2019, at Grand Whiz Poins Square, South Jakarta.

Archied Noto Pradono, Intiland’s director of capital management and investment, stated that this partnership is mutually beneficial for both parties. The two companies have agreed to establish PT Inti Menara Jaya as a joint venture company that will act as the entity that manages Poins Square, and it is to be owned by both parties at a 50% ownership each.

“We are optimistic that this collaboration will provide an added value for Poins Square. It is very strategically located, next to the MRT Lebak Bulus station, and thus it will serve as a meeting point for people that use this transportation mode,” said Archied.

He further stated that the joint venture arrangement includes the development, management, sale, and rental of strata title units and commercial spaces situated in Poins Square, which has a total area of about 36.2 thousand square meters.

As a property developer, Intiland boasts a range of development segments, such as residential areas, mixed-use and high rise, industrial estates, and investment property. This collaboration therefore is one of Intiland’s major growth strategies, in addition to growing organically.

PT Menara Prambanan, as the partner in this collaboration, is a developer that built Poins Square. Commencing construction in 2005, Poins Square is an integrated mixed-use and high rise project with a total area of 2.5 hectares, located on Jalan R. A. Kartini, Lebak Bulus, South Jakarta.

Poins Square is a one-stop shopping complex, offering shopping area, retail area, and hotel, as well as a 15-floor apartment building. Currently the shopping area is known as one of the city’s centers for electronics, mobile phones, computers, and cameras, in South Jakarta. Its hotel is managed by Whiz hotel chain through its 4-star hotel brand Grand Whiz Poins Square.

Kiki Hamidjaja, president director of PT Menara Prambanan, strongly believed that collaboration and cooperation with Intiland will provide an added value for Poins Square as well as its tenants, customers, and the public at large. This cooperation synergizes two entities rich in experience and expertise in property development and retail management.

“This synergy will engender a new concept for Poins Square as a meeting point and a modern hub for the population in South Jakarta and the surroundings,” said Kiki Hamidjaja.

Permadi Indra Yoga, Intiland’s director of business development, stated that the cooperation agreement for the development of Poins Square is part of Intiland’s project development strategy that encompasses three TOD zones. Currently, Intiland has four development projects in the TOD zones, including Fifty Seven Promenade project in TOD Dukuh Atas, Intiland Tower in TOD Bendungan Hilir, Poins Square at the heart of the TOD Lebak Bulus in South Jakarta, and South Quarter, which is 500 meters away from Fatmawati Station.

“Finally, after a long, 20-year wait, we have the MRT, a reliable mode of transportation in terms of time, security, and convenience,” he said.

Yoga explained that by embracing the #LivingConnected concept, Intiland is focusing on the development of projects in the TOD zones. TOD zones have been proven to possess an extraordinary value as they boast the concepts of connectivity, accessibility, and walkability, thus addressing the urban people’s need for improving their quality of life. This collaboration will also focus on creating a direct interconnection between Poins Square and the Lebak Bulus MRT Station.

“We shall renovate and reformulate the concept of the area as well as the retail and commercial facilities, and therefore there will be a conceptual change, from what it was previously, as a trade center, into a transit mall,” Yoga explained further.

As a transit mall, Poins Square will serve as a meeting point and hub for thousands of people that will commute through the area. Also on offer will be a vast selection of grab-and-go food and beverage options, an extra convenience to enjoy from the restaurants and cafés in the complex.***