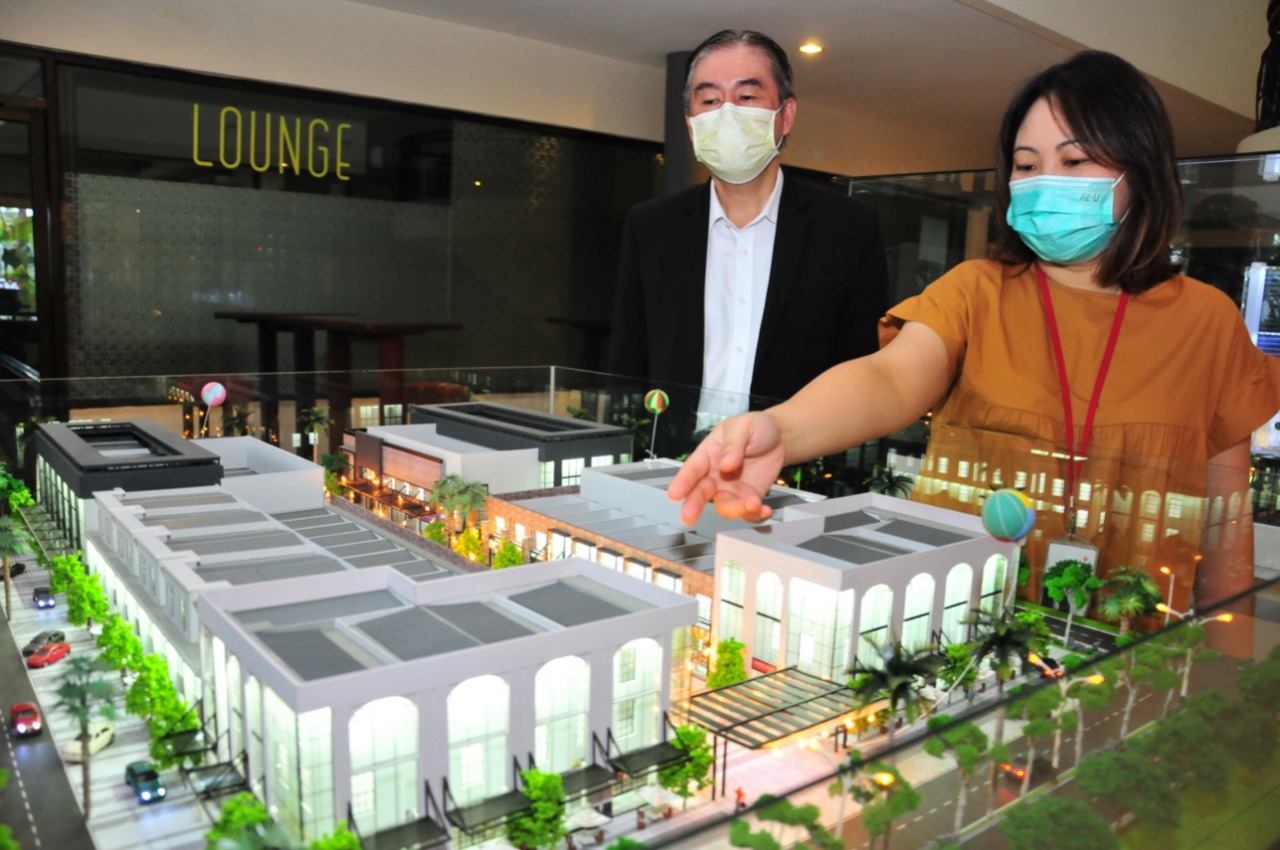 Tierra SOHO is a one-hectare commercial facility development, the first phase of development of the Tierra megaproject, an integrated mixed use & high rise area in West Surabaya. Tierra is a new project that is one of the Company’s flagships for long-term development.

Archied Noto Pradono, Intiland’s Director of Capital Management and Investment, explained that Tierra is one of the Company’s strategic projects planned for long-term development. Tierra’s development is carried out in several stages, which will contribute to the Company’s business performance significantly and sustainably.

“Tierra is part of Intiland’s long-term project development pipeline and is the key project that will contribute to long-term sales and revenue. The success of this sale is a positive signal that the property market is starting to revive again and consumers are back to being optimistic about future market prospects by purchasing and investing in property products,” said Archied at a press conference/media update for Tierra, held online on Thursday (6/5/21).

Tierra’s development occupies an area of ​​7.5 hectares, strategically located in the Segi Delapan area, West Surabaya. Carrying the concept of integrated mixed-use & high rise development, this area is a solution to various needs and activities of the community by integrating various functions, ranging from apartments, offices, hotels, commercial centers, as well as entertainment and modern lifestyle facilities.

The launch of Tierra SOHO is the first phase of development for Tierra. The launch of this commercial product took into account the excellent prospects in the Segi Delapan region as well as the high interest and demand of consumers for the increasing availability of commercial property products.

Harto Laksono, Intiland’s Marketing Director for Surabaya region, revealed that the sales of Tierra SOHO units were well received by the consumers. Since its launch in April, 69 units or 90% of the total available units had been sold. This positive response from consumers confirmed that the property market has begun to revive, especially during the first quarter of this year.

“We appreciate the strong public interest in Tierra SOHO. This trend reinforces our belief that the need for work and commercial space remains high, especially in the West Surabaya area,” said Harto Laksono further.

According to Harto Laksono, the positive response from consumers to Tierra SOHO products was influenced by a number of factors. The first was related to the added value of the product, such as a strategic location, a good regional development concept, a long-term development plan, competitive prices, and innovative building designs. Secondly, market factors include the need for commercial products that continue to grow, market potential in the area, and the recovery of public investment and buying interest, particularly in commercial property products.

From the sales results, the Company noted that the majority of Tierra SOHO buyers were end users. The main considerations in choosing Tierra SOHO were its strategic location, long-term development concept, and the prospect of developing the Tierra area, which has a potential captive market in West Surabaya.

“The location for Tierra’s development is a mature area surrounded by luxurious residential complexes, with tens of thousands of families residing there. This area is also equipped with various facilities such as many excellent schools with thousands of students and other supporting facilities. All of this has become a potential captive market for the development of Tierra,” he said further.

The success of Tierra SOHO aws also influenced by the innovative concept that this commercial property product offered. Tierra SOHO owners can run several different types of business in one unit, due to the availability of separate entry and exit access on each floor.

This facility provides flexibility and important benefits for each owner to run different types of business on each floor, without being disturbed by the traffic of visitors who want to go to different floors. This added value also provides an option for investors as they can rent out each floor with a different tenant, thereby maximizing the potential profit from rental income.

Harto revealed that given the profile of Tierra SOHO buyers, most of them will use their units to run businesses in the food & beverage sector, such as cafes and restaurants. However, there are also buyers who intend to use their properties as offices and education centers.

“Consumers’ response to the sales of Tierra SOHO has been excellent. There are consumers who buy up to 6 units directly, which will later house the second branch of one of the more well-known restaurants in Surabaya, “he said.

The Company hopes that along with the entry of various culinary and retail businesses in the Tierra SOHO area, this area will further develop and become the center of the newest modern lifestyle in West Surabaya. This potential is supported by in addition to the various existing facilities also by the concept of developing an area equipped with a promenade and entertainment facilities, such as a cinema.

In accordance with the development plan, the Company is currently entering the preparation stage for the appointment of a construction contractor. The development phase is projected to begin at the end of this year and is expected to be completed and handed over to consumers by mid-2023.

“Currently, Tierra SOHO only has 7 units left. We are optimistic that the remaining units will be completely purchased in the near future, “said Harto optimistically.

After the launch of Tierra SOHO, the Company immediately started the next stage in accordance with the regional development planning. The development includes residential products with a low-rise concept, apartments, and commercial facilities that are located right next to the Tierra SOHO development area. The Company assesses the return of consumer confidence in purchasing and investing in property since the beginning of 2021, a sign of a positive trend in the recovery of the national property market.

“For further development, we continue to look and analyze the direction and dynamics of the market and consumers. We carry out every new development and investment, especially high rise products, and measure the level of risk and market absorption,” said Harto Laksono.

Anticipating the changes and current market dynamics, the Company has prepared a variety of promo programs that make it easier for consumers to make purchases. The promo program includes the ease of special payment methods, for example providing incentives for opening a business of up to Rp80 million. This incentive is provided by the Company for unit owners who can open their business within six months after the handover of the unit.***