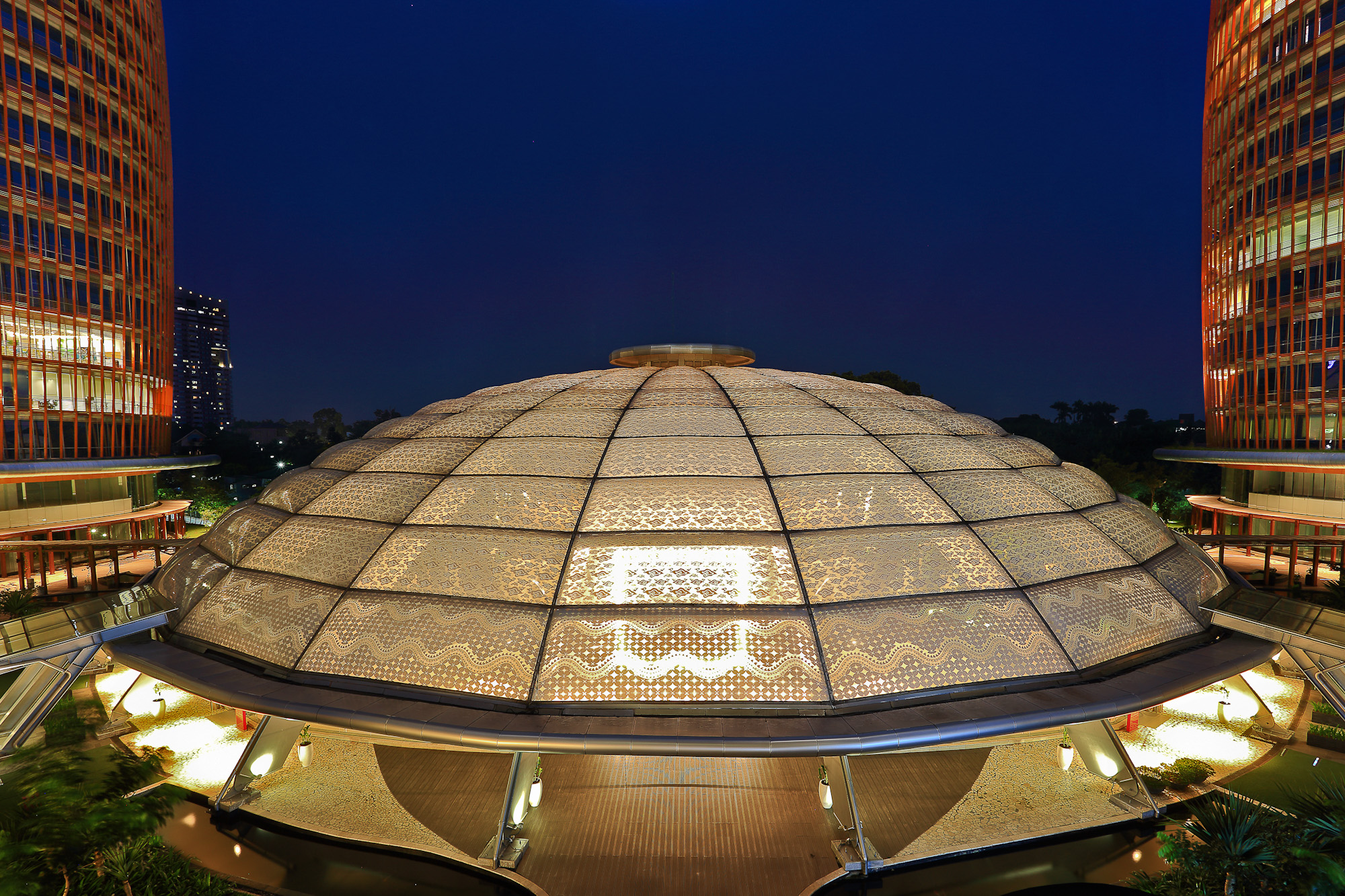 Jakarta (06/09) –South Quarter integrated office development has been named as one of the best offices in the world. The office complex was developed by PT Intiland Development Tbk (Intiland; DILD), a property developer, together with the Singapore investment agency GIC. South Quarter won the World Gold Winner award for the office development category at the world’s most prestigious property masterpiece competition, FIABCI World Prix d’Excellence Awards 2022.

The awarding ceremony was held at the FIABCI World Prix d’Excellence Awards Gala Dinner in Lido, Paris, France, Thursday night (06/09) local time, or on Friday morning 10 June 2022 Western Indonesia Time. The FIABCI World Prix d’Excellence Awards 2022 event was organized by the International Real Estate Federation (FIABCI) to show appreciation and recognition to the world’s best property masterpieces that are innovative and advantageous in a number of key aspects.

Intiland’s Founder and President Director, Hendro S. Gondokusumo, expressed his delight and gratitude to all parties for the achievements and awards given to South Quarter. The World Gold Winner award complemented a series of awards and recognitions previously won by South Quarter in various property competitions at the national and regional levels.

“This award makes us proud as a property developer in Indonesia. This achievement is a form of global recognition of the national property industry’s quality, which has shown itself to be worthy of competing in the international arena. This is a joint achievement that hopefully will inspire other developers to bring about the best property products that will enhance Indonesia’s competitiveness and image on the global stage,” said Hendro S. Gondokusumo.

The FIABCI World Prix d’Excellence Awards are given to property products of the highest level of excellence across all real estate disciplines. Held every year by the FIABCI Federation, headquartered in Paris, France, this award event illustrates FIABCI’s aspiration to provide the society with optimal solutions for their property needs.

As the world’s most prominent property award and competition, the judging process is carried out independently by an international panel of judges consisting of leading real estate professionals and experts with respect to the excellence of the property comprehensively, beyond mere aesthetics, functionality, scale, and project size.

Hendro S. Gondokusumo revealed that South Quarter is Intiland’s third project to win the FIABCI Prix d’Excellence Awards. In addition to the World Gold Winner award for the low-rise residential category, which was clinched by Serenia Hills in the previous year, The Regatta Apartments located at Pantai Mutiara, North Jakarta also won the Bali Congress Awards as one of the best apartments in the world at the 2010 FIABCI Prix d’Excellence Awards held in Nusa Dua, Bali, on 27 May 2010.

“South Quarter is one of the key projects for Intiland’s long-term growth. The development of South Quarter has a strategic value, not only because of its long-term development investment, but also the application and adoption of environmentally-friendly concept and principles, as well as green building principles,” said Hendro S. Gondokusumo.

The South Quarter office is the first phase of development of the 7.1-hectare South Quarter integrated office complex in Cilandak area, TB Simatupang corridor, South Jakarta. The first phase of development includes three office towers and supporting retail facilities, set on an area of ​​4.4 hectares. The three 20-floor office towers boasts a total area of ​​123,000 square meters, equipped with a domed building as a supporting retail facility with an area of ​​12,500 square meters.

Permadi Indra Yoga, Intiland’s Director of Business Development, explained that South Quarter is an integrated office area with a unique design that emphasizes the application of environmentally-friendly elements. South Quarter is one of the green buildings in Jakarta, and has obtained Gold certification for Existing Building from the Green Building Council Indonesia (GBCI).

South Quarter has a unique design featuring a curved and organic-looking shape, inspired by the traditional Indonesian rattan baskets. The three towers are connected with a green canopy with the domed area right at the middle, so as to showcase a thoroughly unique, efficient, and environmentally-friendly design.

The façade of South Quarter’s building is oriented along the east–west axis, thus minimizing its exposure to direct sunlight. The façade design also meticulously considers the direction of the sun’s rays according to the solar path diagram, so that the building’s cooling load can be maintained at a minimum.

“The configuration of the three towers is such that each one is facing the others, so as to create a self-shading effect as a passive design feature. This advantage, coupled with the use of double façades in the form of window walls and louvre façades, effectively reduces the cooling load by up to 21%, according to the simulation results performed throughout the year,” explained Permadi Indra Yoga.

The architectural design of the South Quarter was the work of the world-class architect, Tom Wright, the man behind the Burj Al-Arab Hotel in Dubai and The Regatta Apartments. South Quarter’s superior design and operations have made the office complex, which has been developed since 2014, won numerous awards at national and international levels.

“This award further encourages us to continue to present the best properties for the Indonesian people. Such appreciation and recognition has made manifest our firm commitment to our loyal consumers, strategic partners, and investors, who have been trusting their property investments with Intiland so far,” he explained.

The Most Favorite Office Space

South Quarter is an integrated office and residential area developed to meet the needs for business and residential space for people who are particularly discerning of environmental aspects. The Company sees the level of demand for office space in Jakarta has been increasing in keeping with the improving investment climate and macroeconomic conditions.

“The need in the market for easily accessible business and residential space continues to soar along with increasingly high mobility. South Quarter is well-placed to answer this very need of the community, namely for the availability of strategic business and residential space, with ample access to both public and private transportation infrastructure, not to mention that it has been developed with a sustainability in mind,” claimed Permadi Indra Yoga.

Featuring an excellent regional development concept, the Company has succeeded in making South Quarter one of the most preferred office spaces in South Jakarta, he mentioned. Furthermore, its location is highly strategic: only seven minutes to the JORR toll gate, five minutes to the TB Simatupang central business district, and five minutes to Lebak Bulus MRT Station and Fatmawati MRT Station.

After having successfully developed the first phase of South Quarter, the Company has now commenced with the second phase of development, namely the construction of two SQ Res apartment towers. The construction process is slated to be complete soon, and will be topped off at the end of this month.***